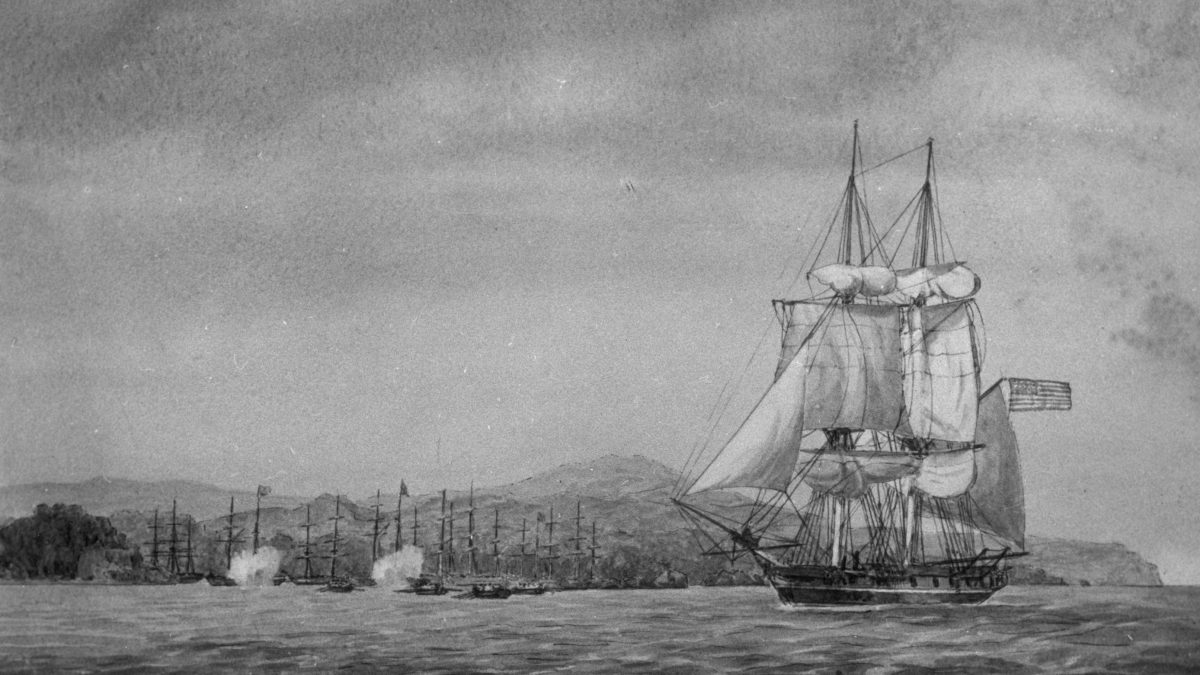 A Local Connection to the Republic of Liberia 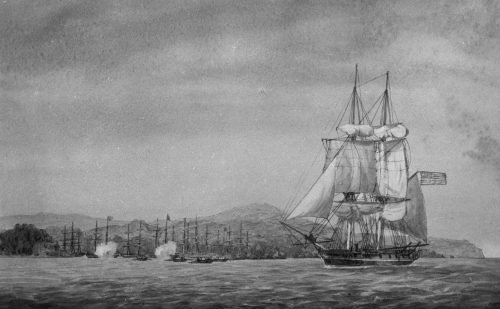 The USS Alligator was a swift, 12-gun schooner built to fight pirates and slave traders. The ship, constructed in the Boston Navy Yard, was commissioned in March of 1821. The Alligator’s first duty was ferrying representatives of the American Colonizing Society. The objective of the society, formed in 1817, was to transport freed slaves back to Africa. Emigration was considered an alternative to the emancipation process that was beginning in America. The colony was ultimately established in 1822.
By 1827 the international slave trade had been illegal in Spain for seven years, the United States for 19 years, and Great Britain for 20. Spanish-held Cuba, however, paid little heed to the prohibition, as is evidenced in a letter written from a British officer in Havana to one in London dated July 31, 1827. It read, in part, “The illicit slave trader from this port… appears to be about to resume its former activity, no less than four Spanish vessels having during the present month sailed are the brigs Guerrero… She is well armed, and has a crew of ninety men; and there can be little doubt that her purpose is to plunder of their cargoes of slaves any weaker vessels that she may fall in with in the coast of Africa.”
The Guerrero was just over 110 feet long with a beam of 27 feet, 5 inches. When the ship left the west coast of Africa to make the over 4,000-mile voyage to Havana, 561 slaves were on board. On December 19, 1827, Lt. Edward Holland and the 56-man crew aboard the H.B.M. (His Britannic Majesty) Schooner Nimble were patrolling the Florida Straits 250 miles north of Havana the Guerrero was spotted off the coast of Orange Cay, Bahamas.
The noon entry into the Nimble’s log read, “Observed stranger to be a suspicious looking brig. I set topsail, cleared [the deck] for action and fired two guns to bring stranger to whom we observed hauling up to avoid us; made more sail.”
By 6:15 p.m., the brig was firing her cannons at the gaining Nimble. For the next 30 minutes, the two ships exchanged cannon and musket fire until the brig feigned surrender by firing a blank and flashing a conciliatory light. The Nimble ceased fire, but then the brig made another run for it! At full sail, the ship slammed into Carysfort Reef. The ship’s hull split open and when the Guerrero filled with water, 41 Africans shackled in the ship’s hold drowned where they were chained.
The following morning, wreckers began to arrive on the scene. The Thorn, Florida, and Surprize had been anchored at Caesars Creek. Aboard Captain Austin Packer’s 39-foot schooner Florida, 142 Africans and approximately 20 Spaniards were boarded. Aboard Captain Charles Grover’s schooner Thorn, 246 Africans and 54 Spaniards were boarded. The two ships set sail for Key West but were commandeered by the Spanish and redirected to Santa Cruz, Cuba, where their human cargo could be sold to sugar field plantation owners for $300 each.
The remaining 121 Africans were boarded onto the Nimble and delivered to Key West. One person died in transit. The Africans were clothed, fed, and housed for 75 days, but rumors had begun to spread that Spanish warships would be sailing for the island. It was decided that for everyone’s safety, it was best to transfer the surviving 117 people to the St. Augustine area.
A letter was written by the U.S. Marshal in St. Augustine to Richard Rush, Secretary of the U.S. Treasury, stated, “While they were in Key West, attempts were made to take them from the possession of my deputy, by force, and by bribery; and, the night before I removed them from the island, an attempt was made to carry off a part of them.”
Unable to support the slaves, the U.S. Marshal rented the Africans out to St. Augustine area plantation owners. During their time in St. Augustine, 17 Africans either died or escaped. In the end, of the original 561 Africans pirated away from their homeland, 100 were attempted to be repatriated. Nine Africans died during the five-month trip home.
In 1847, the African colony established in 1822 became the Republic of Liberia. By 1867, 13,000 freed slaves had been sent there.
has been added to the cart. View Cart
mrkeroppi