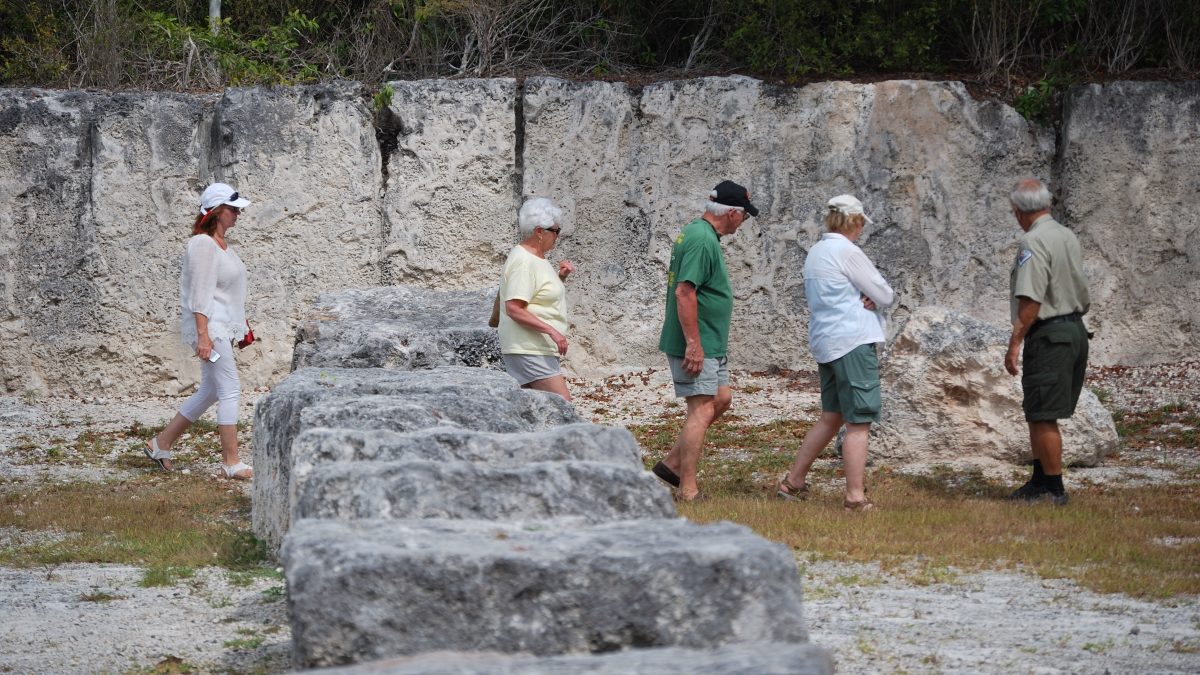 For those looking to take a closer peek at the underbelly of the Florida Keys, a trip to Windley Key Fossil Reef Geological State Park could not be more eye-opening. Because areas of the park once operated as a quarry site, exposed quarry walls provide an amazing glimpse into a time when the islands were still submerged and teeming with marine life.

The Paleozoic Era begins at the end of Precambrian Time and lasted until just under 300 million years ago. The next major period is the Mesozoic Era lasting from about 250 million to 185 million years ago. The most famous of the periods in this era is the Jurassic Period, better known as the Age of Reptiles. The last of the eras, the Cenozoic Era, begins with the end of the dinosaurs some 66 million years ago. The Cenozoic is the modern era and is referred to as the Age of Mammals.
The Cenozoic Era is divided by some experts into the Tertiary and Quaternary periods. The Tertiary consists of the Paleocene, Eocene, Oligocene, Milocene, and Pliocene Epochs. The Quaternary Period consists of the most recent epoch, the Pleistocene, and the current Holocene Epoch. The last epoch, the Pleistocene was aptly named as it is based on the Greek word for “most recent.” The Pleistocene Epoch spanned, roughly, from 2.6 million years ago, or the end of the Pliocene Epoch, to about 11,700 years ago and is most famously associated with the Ice Age.
During the Pleistocene Epoch, the planet is described as going through an Icehouse Earth period. There are basically two different climatic periods that have been assigned to the planet’s history, warmer periods which are called Greenhouse Earth periods and the colder periods. During Icehouse Earth, cyclical patterns of glacial ebbs and flows are observed and follow, roughly, 100,000 year intervals. These consist of extended periods of glacial expansion lasting roughly 80,000 years, called Glacial Periods, followed by a 20,000 year period of glacial retreat called Interglacial Periods.
The Pleistocene Epoch’s last Glacial Period saw the planet as a largely colder and drier world with as much as a third of the modern land mass covered in ice. In what is today the central and northeastern United States, some of the ice fields that had formed measured as much as two miles thick. Because sea levels had dropped significantly during this period, what would become known as the Florida peninsula was a much larger feature than it is today. By some accounts, it stretched all the way east to Hawk Channel, flowing between the modern barrier reef system and the island chain from the Northern Keys encompassing Biscayne National Park to Key West. The land mass also encompassed Florida Bay and the whole of the archipelago. To the west, the peninsula stretched 100 miles further out into the Gulf of Mexico.
The end of this last Ice Age occurred during what has been recorded as the Last Glacial Maximum that occurred approximately 20,000 years ago. During the Last Glacial Maximum, the planet entered a warming cycle and the tremendous ice sheets that had built up through the last Ice Age began to melt. When, some 18,000 years ago, sea levels began to rise and coastal areas began to flood, a modern Florida slowly began to materialize. It would take thousands of years, but as it did, temperatures, too, began to rise and Florida’s modern, hot and humid climate began to be established. Florida, as it became defined as the state of Florida on March 3, 1845 and recognized as the Sunshine State today, became its modern self some 8,000 years ago.
The Florida Keys archipelago, too, slowly began to appear or, in this case, reappear. Coral reefs began to form in the Atlantic shallows some 350,000-400,000 years ago. Subsequent sea level fluctuations would intermittently cover and uncover these corals, in cases exposing them to sun and air. When this would occur, land would develop atop these exposed sections of reefs only to be again covered during the next rise in sea levels.
One of these ancient reefs forms the basis of the Florida Keys which developed atop fossilized beds of coral and limestone. Two kinds of limestone went into the creation of the island chain, Key Largo limestone and Miami limestone. While the Key Largo variety is generally associated with the Keys north of, roughly, Bahia Honda, the Miami variety is the limestone associated with the Keys south and west of Big Pine Key. In reality, Key Largo limestone runs the length of the archipelago and is topped by layers of Miami limestone in the Lower Keys and all the way to the Dry Tortugas.
has been added to the cart. View Cart
mrkeroppi