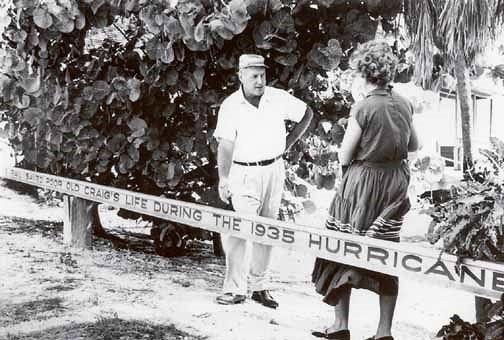 The Story of Craig Key

Camp Panama was not found as far south as the name might infer. While headquarters operated out of a Miami location, the fishing camp was located in the Florida Keys. By January 1931, the fishing camp was being advertised, with rates for the camp ranging between $12.50 and $15 a day. Railroad transportation from Miami and back, lodging, meals, fishing guides, tackle, and boats included with payment. Though Prohibition was in place and would be until 1933, liquor was likely readily available for guests, though not advertised.

It was not possible to just show up at Camp Panama. Reservations were required and made through Roland Craig. Originally from Ohio, Craig had made a name for himself as a charter boat captain around the Miami docks.

Camp Panama was accessible only by boat or train as there was no road to travel in the Florida Keys between Lower Matecumbe and Big Pine Key. However, ambitious drivers were able to reach Camp Panama just as they could the Long Key Fishing Camp located at the far end of Long Key by driving across the bumpy railroad tracks and narrow bridges that delivered Henry Flagler’s Over-Sea Railroad to Key West.

Technically, Camp Panama was not located on one of the Florida Keys but on a thin stretch of railroad fill created during the construction of Flagler’s train tracks and bridges. Craig leased the slightly J-shaped manufactured fill from the Florida East Coast Railway. It is located between Lower Matecumbe and Long keys between the Channel 2 and Channel 5 bridges.

Craig eventually moved from Miami to the thin little island. Ambitious man that he was, he did not idle the days away fishing but worked to improve his fishing camp. One of the reasons why Craig created his fishing camp on the railroad fill was its deepwater access via Channel 5. Also, the dredging that had been done during the railroad construction years created a convenient deep water harbor for his clientele. One of those early guests to his fishing camp was President Herbert Hoover. Hoover was an avid fisherman who fished the waters surrounding the Florida Keys for decades. It is rumored that Hoover was at least partially responsible for the Craig Post Office becoming established in October 1932. The story suggests that Hoover wanted a place to receive mail while he was down in the Keys on a fishing vacation.

Establishing the post office gave the strip of railroad fill an identity. It became known as Craig, Florida. Craig was about to blossom. In addition to the docks that helped serve Camp Panama, a gas station for visiting yachts, store, hotel, restaurant, bar, and private cottages were built. There were drinks to be had at the bar, but patrons could also play a little poker, craps, or try their luck on the slot machines.

All of Craig’s endeavors would come to a destructive end when the Category 5 Labor Day Hurricane devastated the Upper Keys. Craig was lucky to have survived the storm after he chose to ride out the killer hurricane in Craig. He managed to cling to the railroad tracks for dear life. After the hurricane, the former right-of-way of Flagler’s doomed train was sold to the state. Craig renewed his lease for his fill island with the Florida State Road Department and rebuilt his little community. When the Overseas Highway reopened in 1938, the road passed right through the middle of Craig, Florida.

Looking to expand his landholdings, in the 1950s, he financed two fill projects that created the two small islands that are now linked to Craig. The two little keys were reportedly first called Maloney Key and Coo Key.