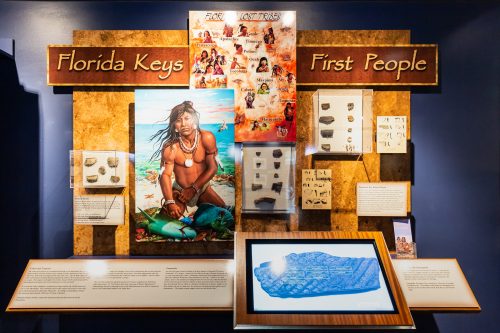 From the origins of aboriginal peoples who first settled along the shores of Lake Mayiami to the Calusa and Tequesta who traveled up and down the island chain, Florida Keys First People explores the indigenous people of the area. The exhibit uses a mixture of artifacts and firsthand early European accounts to tell the story of a people who called these islands home more than 1,000 years ago.

The Florida Keys First People exhibit was funded in part by a grant from the Monroe County Tourist Development Council. 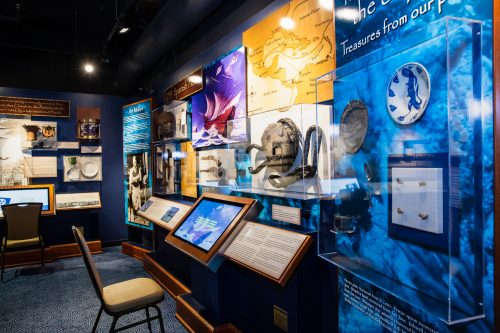 The exhibit focuses on the treasure fleet ravished by a September hurricane off the coast of the Upper Keys. Learn about the routes used by Spanish sailors as well as stories of the ships that sank in the shallows from Key Largo to Key Vaca. Artifacts on display for this exhibit were salvaged from local wrecks, including Spanish coins dated 1732.

The 1733 Spanish Fleet exhibit was funded in part by a grant from the Monroe County Tourist Development Council. 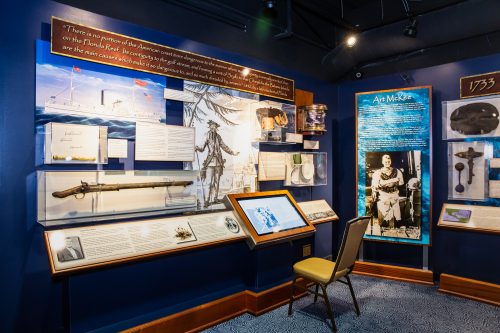 From the alleged exploits of Black Caesar, perhaps the Keys most famous pirate, to Captain Ben Baker, the King of the Florida Wreckers who was not only a successful wrecker, but a Key Largo pineapple farmer, Pirates, Wreckers and Salvagers delves into the facts and fiction of those men who plied their trade along the dangerous Florida Reef. The exhibit also explores the efforts of men like Art McKee who braved the underwater realm to salvage the treasures lost to the sea.

The Pirates, Wrecker and Salvagers exhibit was funded in part by a grant from the Monroe County Tourist Development Council. 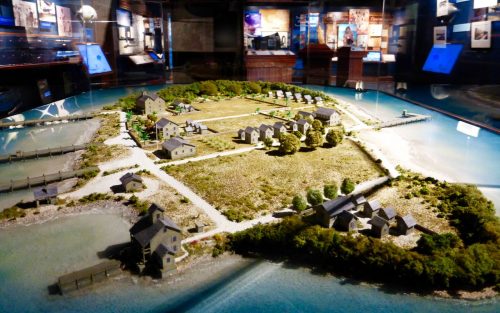 Though once the second largest community in the Florida Keys outside of Key West, walking past the few ruins left on Indian Key paints a poor picture of what was once a thriving village. Now, visitors can see a permanent model of the island showing how it might have looked circa 1840.

This exhibit provides a better appreciation for the complexity of life on Indian Key. In addition to the model, artifacts discovered on the island as well as first-hand descriptions and summarized accounts of life on Indian Key, both prior to the Seminole attack of 1840 and after, are presented. Artifacts are on loan from the Florida Division of Historical Resources.

The Indian Key exhibit was generously sponsored by Ken and Dee Meeks. 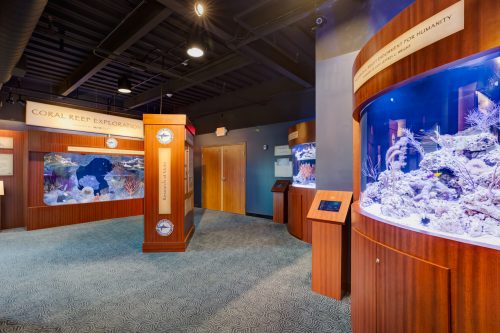 The result of an exciting partnership between Mote Marine Laboratory and Florida Keys History and Discovery Foundation, Coral Reef Exploration features three aquariums, educational storyboards, interactive kiosks, video monitors and a game geared to children. The exhibit focuses on providing both a beautiful and educational view of our unique coral reef ecosystem and the challenges it faces.

The largest of the aquariums, at 1,250 gallons, showcases species making their home around the Florida Keys coral reefs, including angel fish, butterfly fish, tangs and wrasse. Guests to the Discovery Center can get up close and personal with invasive lionfish in a 280-gallon aquarium, and check out live coral, crustaceans and reef fish living in a second 280-gallon aquarium.

The Coral Reef Exploration exhibit was funded in part by a grant from the Monroe County Tourist Development Council and through in-kind contributions from Mote, including annual maintenance and upkeep.  The Coral Reef Aquarium was sponsored in memory of Harold & Bettie Bartlett who loved the waters of the Florida Keys.  The Live Coral Aquarium was sponsored by The Charles G. Wright Endowment for Humanity.  The Lionfish Aquarium was sponsored by the Russell, Knudsen & Samuels Families in honor of Juanita Russell Knudsen.  Other significant funding was provided in the name of Devon Cable and Zach Cable and by the Lindback Family, Ocean Reef Conservation Association, Barbara Haudenshield, Amy Knowles, Suzanne Miller. 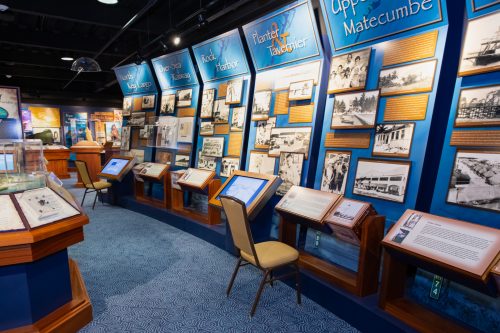 Stories of the Upper Keys

The most comprehensive and elaborate exhibit developed to date, Stories of the Upper Keys encapsulates several significant aspects of our local history. In addition to subjects like Henry Flagler’s Over-Sea Railway, the Overseas Highway, and the 1935 Labor Day Hurricane, the exhibit explores the people who carved niches for themselves and their families from a considerably more inhospitable string of islands than the sub-tropical paradise we live in today.

The exhibit includes storyboards, more than 50 historic images, touchscreen monitors filled with more images and more stories as well as a video component with directional sound focused downward by audio domes in order to reduce the impact on surrounding exhibits. The first video available is an interview with President Herbert Hoover after a fishing excursion from North Key Largo’s exclusive Angler’s Club.

Also featured in the exhibit are a smattering of artifacts on loan from the Henry Morrison Flagler Museum in Palm Beach and Upper Keys historian,  Jerry Wilkinson.

The Stories of the Upper Keys exhibit was made possible through grants and donations from Monroe County Tourist Development Council, the Charles G. Wright Endowment for Humanity, the Florida Keys Electric Cooperative and the Flagler’s Folly Society, a member organization of young professionals aimed at meeting the mission of the Florida Keys History and Discovery Foundation. 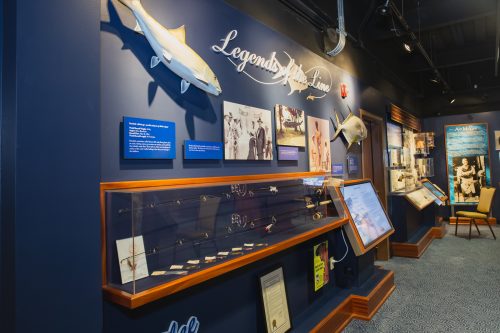 Legends of the Line

The first of our permanent exhibits, Legends of the Line explores a host of legendary fishing guides and fishermen who frequented the Upper Keys from 1915 through the 1960s and beyond.  In addition to the fishing guides, the exhibit also explores how fishing developed into a new industry in the Florida Keys – tourism, as well as the role the Overseas Railway and Overseas Highway played.

The Legends of the Line exhibit was generously sponsored by Caribee Boat Sales & Marina.

The 16th century bronze cannon was salvaged from a wreck thought to have been part of the 1563 treasure fleet lost to a hurricane near the American Shoal Lighthouse in the Lower Keys. The period correct carriage was handcrafted by Campbell Cannon and Carriage Works based on 16th century Spanish designs. The cannon, donated by the Rapperport Family, is on long-term loan from HistoryMiami Museum.

The 18th century anchor is nine feet tall and six feet wide at the spades. It was salvaged by Art McKee, the father of modern treasure diving, in the 1940s from the wreck of the El Infante. The Infante was part of the 1733 New Spain fleet that succumbed to a hurricane. The ship wrecked off the southern tip of Key Largo. The anchor is on long-term loan from the Mel Fisher Maritime Museum in Key West. More artifacts from the Infante and other ships of the 1733 New Spain Fleet are part of the permanent exhibits.

The El Infante Anchor exhibit is supported by the following donors: Vic and Lynne Weiger in memory of Bob Mitchell.

This exhibit, created in partnership with Bonefish & Tarpon Trust, features the importance of the sport fishery which includes bonefish, tarpon and permit and the habitat, specifically sea grass, in which they live. The exhibit further recognizes through the Circle of Honor legendary anglers, guides and conservation leaders who have made significant contributions to the conservation of bonefish, tarpon and permit – the species, their habitats and the larger fisheries they comprise. New honorees are named each January. The late Captain Bill Curtis and Captain Bob Branham are the 2021 honorees.